In terms of wool classing training, tutoring of wool and mentoring at Lincoln College (as it was known in those days), Bruce was an icon of his time from the 1950s right through until he retired in the early 1990s.

He represented a golden age in the wool business and Bruce was at the forefront of training.
At all times Bruce gained the respect of those who he influenced by his quiet demeanour and the passion he had for wool.
There would hardly not be anyone within the wool trade within New Zealand in the last 60 years that were not directly or even indirectly be trained or influenced by Bruce’s teachings.

Bruce was a private man, and there was more to him than just a wool man. He spent many years a high-country musterer and an adventurer of his time. In fact, it was mainly through his adventures climbing Mt Cook in the 1960s that inspired me to follow the same route up Mt Cook.

Bruce showed a deft hand or should I say deft feet at Spanish dancing and was often seen in the local dance halls showing off all the moves. Not only was quick on his feet, but he also spoke Spanish and was contacted many times as an interpreter. 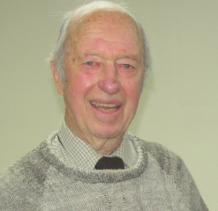