Bruce Abbott, who has worked in the wool industry for 59 years, has decided to hang up his woollen socks from what has perhaps been his most influential role in this long career.

As Registrar and Executive Officer for the NZWCA for six years up until the end of 2020 followed by a short stint as Education Officer, he has brought about significant change in the services offered by the organisation to its members and also in the contribution that the Association has made to supporting the interests of the wider industry.

Commenting on this, NZWCA chairman Bill Dowle said Bruce had taken the organisation to “another level” through the relationships forged with other industry organisations and companies. Bruce stepped into the role after serving as board member for 4 years. Bill highlighted Bruce’s drive, enthusiasm and perseverance. A broad-based career in the wool industry along with his ability to forge excellent working relationships with people at all levels has contributed to Bruce’s achievements for the Association. Congratulating Bruce on giving a lifetime of service to the wool industry Bill also pointed out that service to others is in his blood.

In earlier years while living in Millers Flat he was appointed as Chairman and project manager for introducing a drinking water supply system to the township of 150 people (now over 100 connections) and raising $780,000 for the project. This fund–raising ability has continued in his NZWCA role with Bruce both promoting Associate memberships to non-classers including industry organisations and wool growers but also bringing in sponsorships for a range of Association initiatives. Other community projects he has been involved in include building the Hockey clubroom at Maidstone Park in Lower Hutt, serving on the committee to develop the Leslie hockey ground in Timaru and as a member of the committee that put in the first hockey artificial turf in Dunedin.

Sport has played a big part in Bruce’s busy life. He represented Otago, Southern Minors and South Canterbury in hockey and was picked for the NZ colts’ side and represented NZ Country in their Australian tour in 1970. He now plays outdoor bowls and holds over 20 club titles. That competitiveness is reflected in his work ethic with all focus on delivering a top-class performance.

Bruce has been living in Mosgiel in recent years with his very supportive wife, Pat. Without all that support from Pat over so many years Bruce says “l would not have achieved anything”. Bruce grew up in Dunedin and, after leaving school in 1964 he worked for six months with his Waimate based brother-in-law Bryan Wright, who was a wool buyer. He then got a job with National Mortgage as a trainee classer followed by a year working in woolsheds in Australia. He was then accepted for the Diploma in Wool and Wool Classing at Massey University, a qualification held by many of today’s industry leaders. Following this he returned to Dunedin to again work for National Mortgage.

Later he worked in wool scours in Timaru, Sawyers Bay and Wellington, before a role in the New Zealand Wool Testing Authority’s head office for a year in Wellington. ·

He and his wife, Pat, and their two children, then returned to Dunedin where he spent 6 years running the Dunedin office for NZWTA. Duane Knowles, now CEO for NZWTA says “Bruce, your tireless efforts over many years are much appreciated. While the industry is a fraction of what it was when you started out in it, you have set some wonderful platforms to ensure it can function appropriately for any further changes. You can be very proud of your achievements.”

On leaving NZWTA Bruce and Pat took on a number of roles. Among them was managing the YMCA accommodation in Moray Pl, Dunedin for a period before moving to Cromwell in Central Otago where they took on the role of running the chalet accommodation for the Otago Polytechnic. They then moved to their holiday home in Millers Flat. In their time there they took on the ownership of the Millers Flat 4 Square Store.

During this time after an approach from Willis Arbuckle (A650) in 1989 he became a self-employed wool classer managing 15 clips a year, including Halfway Bay, Cecil Peak, Walter Peak, The Branches and Motutapu. That included 100 days “on the trot“ without a break.

Bruce joined the NZWCA board in 2010 and then took over the role of Executive Officer in 2014.Graeme Bell, a former chair of NZWCA, comments that “Bruce, you have made a very active and passionate contribution to the wool industry through your roles with NZWCA. Enjoy your retirement Bruce your contribution will not be forgotten.”

Bruce continued to class a few sheds during his role with NZWCA and says this kept him in touch with what was going on and it helped him as far as the Association was concerned. He will continue as a classer as long as he is fit enough to do it, and will also continue to be a bit involved in aspects of wool education.

Bringing increased education opportunities to people working throughout the wool industry has been a highlight of the past 6 years. With strong support from NZWCA Chair, Bill Dowle, some other board members and industry leaders he drove the charge to ensure retention of the Level 4 Certificate in Wool Technology which for many years has been delivered by long term lecturer and tutor, Laurie Boniface based at the Massey University Wool Room.

For a while it looked as though this programme would die through lack of a training organisation to deliver what is the most comprehensive wool focused qualification that has been available over the past 20 years. First it looked as though Lincoln University would pick up the role of long-term host and Bruce played a significant role in adapting the course content to comply with the university procedures but after a short stint they pulled out. Next Taratahi Agricultural Training Centre in the Wairarapa were persuaded to pick up the role but it was not to last long with this organisation being forced to close down. Intensive negotiations lead to the Southern Institute of Technology/Telford (SIT) becoming the new host. Stability has now been achieved with a lot of support being provided by Bruce, both in bringing in industry professionals to provide a further revision of course content and also in working with industry to enroll employees in the programme. Over the past three years there had been about 30 students enrolling each year which had been a trebling in participation on that of earlier years

Bruce represented the Association on the Primary ITO Wool Advisory Group which is primarily focused on overseeing wool harvesting training and initially comprised shearing contractor and wool grower interests. A lack of industry funding for training means there have been big challenges in this area but Bruce was instrumental in persuading the ITO to include industry participants working past the farm gate to join the group bringing a broader perspective to the groups endeavours.

One of these is Philippa Wright of Wright Wools Ltd. Philippa is Bruce’s niece and says that “actively working alongside Bruce on both the Primary ITO Advisory Group and latterly working alongside him to ensure the continuity of the Wool Technology Certificate and its standards has been a real privilege. Bruce has a wonderful work ethic and with his very broad knowledge of the wool industry was able to ensure everyone in the pipe-line was considered. We have attended many meetings together and it’s been all of fun and frustration but also incredibly satisfying. I think Bruce has well and truly earnt his retirement”

He also took a keen interest in promoting careers in the wool industry and has participated in events organised by the food and fibre collective career promotion organisation known as “Growing NZ”, as well as nominating young people working in the industry to participate in regional and national school career promotion events.

Bruce worked with Primary ITO and SIT to establish a new wool grading qualification that would provide woolhandlers with the knowledge to prepare for sale crossbred and mid micron hogget wool that did not need such rigorous handling as wool required to be classed. Bruce has always been concerned about a lack of grading of crossbred clips and he believed that such a course was essential for the crossbred wool industry noting that low prices has resulted in many growers being unwilling to cover the cost of good preparation even though market returns indicate there is a reward for doing so. The first entry of 14 students took place in October.2020 and three more courses, at a range of locations, have been held since with Bruce being the principal tutor. Feedback from woolhandlers, shearing contractors and wool brokers about the quality of the course has been very complementary.

Over the past 15 years, NZWCA has been holding professional development days for members combined with open days for workers in the wool harvesting industry. Those days had grown under Bruce’s leadership from one or two events a year, to an average of five. While they had a strong focus on reinforcing standards for both fine and crossbred wool preparation, they had been expanded to include wool pressing standards, wool recognition exercises, documentation, displays of contamination, health and safety and displays of wool products. Increasingly good attendance is being achieved with about 80 people, ranging from wool buyers and brokers to classers, farmers and representatives from scours attending a recent event in Ashburton. A feature of these events has been participation by a range of quality industry speakers.

Bruce and Pat have two children, Pauline and Gregory, and 5 grandchildren Summer, Cathleen (Pauline’s children), Natasha, Shea and Dion (Gregory’s children) and plan to spend more time with them.

But we are sure that we will continue to hear from Bruce from time to time in the future and that probably will be expressing a view about the future of this industry which he is so passionate about. As he said in a recent interview “Everybody is looking for the wool industry to turn the corner”. “Everything goes in cycles, like fashion”. Meanwhile we’ve got to go back to the breeders and say, you‘ve done well breeding sheep for meat, what about the wool side?”

Written by NZWCA Patron and Board member Allan Frazer. 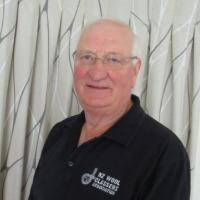