Matangi now has the fourth generation working there. John has been working on the station since coming home from boarding school nearly 45 years ago. In 1980 he did a Certificate in Wool at Lincon College-graduating with distinction. Since then he has classed, not only the Matangi shed,but his brothers’ sheds and others. These days it’s generally only Matangi wool which he classes.

John has judged shows in New Zealand and Australia and has been active with the Merino Junior Judging. Besides Merino sheep-which he also exhibits at A & P shows, his other main interest is curling, having been selected to represent New Zealand internationally eight times. He is also on the executive of the New Zealand Curling Association. John has been with his Australian wife, Mary-Liz, for 16 years and they have 6 children between them, and a ‘growing’ number of grandchildren. 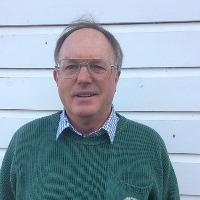